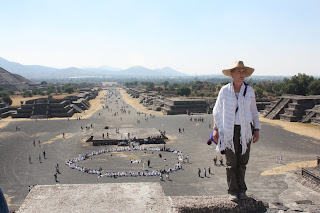 Next week I'll be attending The Artist's Dream in Teotihuacan, Mexico, a journey which is hosted by the remarkable artists and healers Iva Peele and Emily Grieves. Teotihuacan, the "Place Where Humans Becomes God", is an ancient Toltec site outside of Mexico City that was once a bustling center of spiritual wisdom and transformation.

Over two thousand years ago, the Toltecs were known throughout Mexico as men and women of knowledge and artists of spirit. As artists, they owned the power and responsibility of being the creators of their world. A Toltec is not defined by belonging to a race of people, but by the common practice of continually transforming personal belief systems and honing awareness in order to experience heaven on earth. Through the Toltec's exploration of their inner and outer world they came to realize that living a life of happiness and love is a personal matter, one that can only be created from the inside. With the acceptance of our partnership with Creation, we are the quintessential Artists. How beautiful we want the canvas of our lives to become is up to us.

Toltecs live with clear intentions about themselves, the world and their place in it. It is a practice of ever heightening consciousness that allows one to live a joyful life filled with integrity and meaning. A Toltec is a Spiritual Warrior whose quest is for personal freedom. Personal freedom is attained when one gains mastery over the beliefs of the mind. It is a state that is simply described as living with gratitude, unconditional love, and respect for all of creation.

In our modern era, Toltec teachings have been popularized by Carlos Castaneda's The Teachings of Don Juan, which he wrote in 1968, and by Don Miguel Ruiz's best selling book The Four Agreements. The teachings of the Toltces are united with the same wisdom and truth of all the world's spiritual paths. It is a transpersonal way of life.

To live the Artist's Dream is to voyage into the mystery of being with an open heart and clear mind. Being an Artist calls us to have the courage to live with passion and embrace our divinity.

As the poet Marianne Williamson said so well:

We ask ourselves
Who am I to be brilliant, gorgeous, talented, fabulous?
Actually, who are you not to be?
You are a child of God.

Your playing small
Does not serve the world.
There's nothing enlightened about shrinking
So that other people won't feel insecure around you.

We are all meant to shine,
As children do.
We were born to make manifest
The glory of God that is within us.
It's not just in some of us;
It's in everyone.

And as we let our own light shine,
We unconsciously give other people permission to do the same.
As we're liberated from our own fear,
Our presence automatically liberates others.

Posted by Marisa Smith Weppner, MA at 10:38 AM No comments:

That blank look. It's what most people give me when I mention Transpersonal Psychology. I can almost hear the voice in your head saying, "Transpersonal psychology? What the heck is that?"
I know its the word transpersonal that's got you hung up, so to simplify matters I quickly add that its like spiritual psychology. But since I've got your attention, let's turn towards, not away from, the transpersonal...

The word is easy enough to break down: "Trans" is a Latin prefix meaning across, over or beyond, so attaching that to the word "personal", whose definition includes arising from personality and involving persons and human beings, we arrive at the concept of reaching beyond or transcending the individual or personal.
And I love the real definition of psychology. Its not the study of the mind, like most think, but the study of the soul. We all know "ology" refers to the study of, but did you know that "psyche" comes from the Greek word psuche meaning breath, life or soul:

Psuche
"The breath of life, (the vital force which animates the body and shows itself in breathing life, in which there is a living being, a living soul) the soul (the seat of feelings, desires, affections, aversions [our heart, soul etc.]...The soul as an essence which differs from the body and is not dissolved by death (distinguished from other parts of the body)."

Yes, technically, psychology as we know it in our culture is the study of the mind and behaviors, but let's consider for a while this idea of the study of the soul, the essence of being. From that perspective, it makes considerable sense to study the soul through a lens which includes the transpersonal. Transpersonal experiences are characterized by non-ordinary states or shifts in consciousness that are beyond rational thinking. Doorways to the transpersonal include: near-death experiences, meditation, mystical experiences, ritual, trance, dreaming, the use of psychedelics & other medicines, yoga, dance, music, art, contemplation or even spontaneous gnosis. Such experiences are described as moments of awakening, ascention, samadhi, enlightenment, illumination, opening, liberation, or union.

It is interesting to me that native and Eastern cultures do not even have systems of psychology. For them, an understanding of the soul, and the evolution of consciousness or mind, is built right into their society. Instead of specialized psychologists and counselors to help people find their way out of themselves, they have monks, yogis, shamans, healers, priests, sages, and seers to guide the course. It is an invention of the modern mind to view the ego as the seat of the Self, as the highest authority, and one look into our rates of suicide, depression, anxiety, illness and neurosis will give you an idea of how that's been working out for us. Without a sense of something greater we are without meaning and feel lost.

Paradoxically that which gives us meaning is itself impossible to define. Yet, as my beloved colleague Russell Park PhD once said, you know you are close to truth when there is a paradox. Transpersonal psychology is the study of all paths to Truth, their methods, causes, effects, and the disciplines and practices they inspire. The human personality is not an end in its self, but a vehicle for the soul to navigate through the world. Through the application of spiritual techniques the highest levels of human potential may be realized and our pure essence of being remembered.

This is Transpersonal Psychology, and I find it fascinating.

“The treacherous, unexplored areas of the world are not in continents or the seas; they are in the hearts and minds of men.” - Allen Claxton
Posted by Marisa Smith Weppner, MA at 3:47 PM 1 comment:

I honor that place in you in which the entire Universe dwells.

I honor that place in you which is of light, of love, of peace and of truth.

We are one.
Posted by Marisa Smith Weppner, MA at 2:40 PM No comments:

A Lesson in Tapas

I lifted my head from child’s pose and glanced across the studio at my Mom. She was lying outstretched on her back, collapsed in a disheveled sivasana. Her head rolled towards me and our eyes met. “I suck,” she mouthed silently. I shook my head and we both giggled.

At 51 years old, having never experienced an Ashtanga class, Mom decided to build her upon her five years of yoga teaching by enrolling in a nine-day Ashtanga Teacher Training. I tried to caution her about the style’s vigor, but as I didn’t want to be discouraging my warnings were too subtle and she was not dissuaded.

On the third day of the training, I was allowed to attend the morning’s Mysore practice. As I moved through the Primary Series I witnessed Mom struggle with each posture. She was so sore from the previous two mornings that each movement was heavy and raw. The kind, gifted teacher David Garrigues nursed her with encouragement and modifications, even suggesting that she take a break. But through the aches and obvious struggle she continued on.

Tapas, a Niyama of the Eight-Fold Path of the Yoga Sutras, is understood to mean purification through heat as well as discipline. Looking into her exhausted eyes, I felt privileged to behold a person focused enough to transcend limits of the mind, heart, and body. This was not a woman who sucked at yoga, but one who through the purity of her efforts was true tapas in action.
Posted by Marisa Smith Weppner, MA at 3:11 PM No comments: 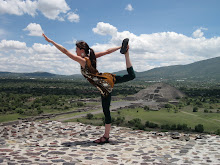 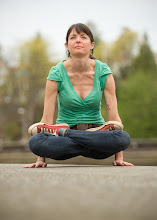 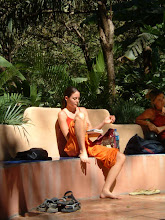 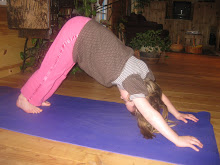 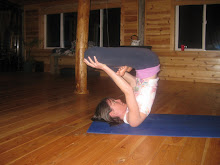 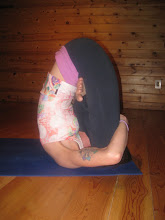 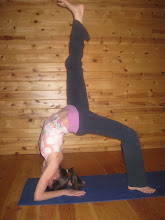 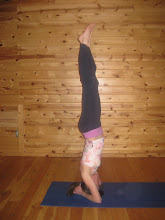